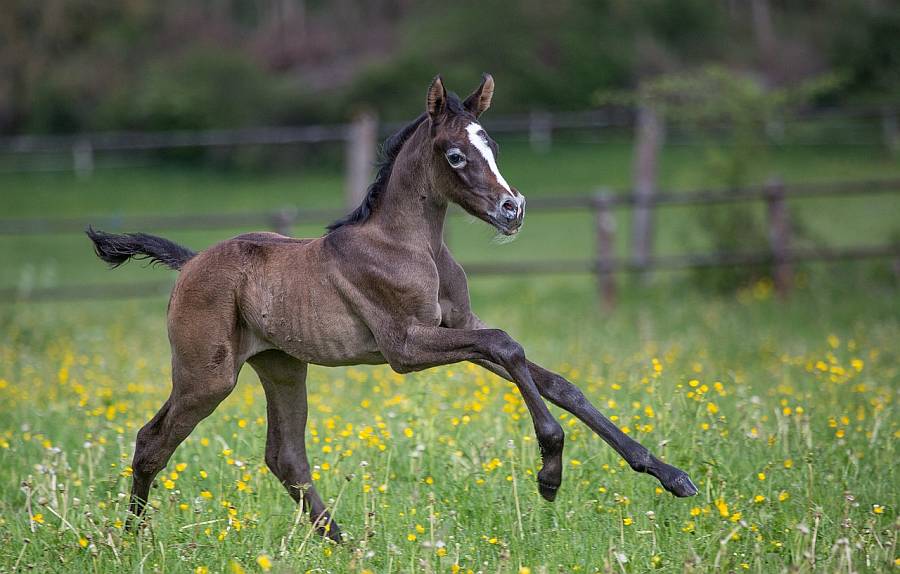 If separated from the herd, an uncastrated horse may even cause injury to itself during attempts to gain access to the mares.

Best age to perform a castration

While horses can be gelded at any age, owners should be aware that the challenge of managing an uncastrated colt will increase as the animal approaches sexual maturity. When castration is left until after sexual maturity, the horse will lose the ability to reproduce but may retain some learned stallion-like behaviors that can be difficult — if not impossible — to eliminate. If you don’t intend to use your male horse for reproductive purposes, you should geld him at a young age.

In general, veterinarians advise castrating colts within a year of birth, ideally between six and 12 months. At that age, the colt’s testicles are relatively small and easy to remove. Additionally, post-operative complications are less likely to occur and recovery tends to be faster.

There is a belief among some horse owners that castration should be delayed to allow the colt more time to develop. The idea is that delaying castration will result in the horse maturing with a slightly shorter stature and crestier neck than a full-grown stallion. However, veterinary science does not support this practice. There is simply no evidence-based research indicating that uncastrated colts develop any differently than castrated colts.

What time of year is preferred?

Early spring and mid-autumn tend to be the best times to schedule a castration. The colder seasonal weather will reduce the risk of flies and mud, two potential causes of wound infection. Also, following the operation, the gelding’s sheath will swell due to trauma from the surgery. Colder temperatures will help mitigate the amount of swelling, allowing for more comfortable urination.

It’s best to schedule castrations in the morning to allow close monitoring throughout the day following the surgery.

Generally, it is advisable to castrate your colt on your premises. This is because the patient, upon regaining alertness after the surgery, will recognize his surroundings and feel less stressed. The surgery should be performed in a clean, dry setting, preferably an open area such a field or an outdoor or indoor training space. It’s best to avoid small enclosures, such as a stall. The colt is at risk of injuring itself against the walls while returning to consciousness and regaining his feet.

Scrotal hernia. On rare occasions, a pre-castration health check on a colt will reveal a scrotal hernia. This is a condition in which a piece of intestine is located within the scrotum. In this case, there is direct communication between the scrotal sac and the abdomen, and the surgery is considered an abdominal surgery. For this reason, it’s best to schedule treatment in a hospital.

During castration, the horse can be standing or recumbent (lying on his side or back):

Standing castration. The horse must be restrained with a twitch, heavily sedated and administered a local anaesthetic in each testicle. Since the horse doesn’t have to lie down for the surgery, there’s no need for him get back up afterwards. Thus, the risk of injury when attempting to stand is avoided. The main drawback to standing castrations is that if surgical complications arise, such as severe bleeding, your veterinarian must quickly anesthetize and lay down your horse before treating it.

Recumbent castration. The horse is rendered unconscious by administering a general anesthetic. At Allossery Equine, we generally recommend recumbent castration and general anesthesia. The reason for this is it gives us greater control over both the horse and the surgical process. Ultimately, we feel this approach is safer for the veterinarian, safer for the horse and helps minimize postoperative problems.

How a castration is performed

With the horse unconscious and lying on its side, a rope is used to separate the legs, giving the veterinarian access to the scrotum. Each testicle is frozen with local anesthetic for maximum comfort and to minimize surgical stimulation. For each testicle, long incisions are made in the scrotum that allow the testicle, its blood vessels and the spermatic cord to be completely exposed. Next, a surgical instrument called an emasculator is used to crush the attached blood vessels and spermatic cord, and then remove the testicle. Afterwards, the wound is left open to allow drainage, which will prevent infection as healing occurs.

How long does it take?

Since 99 percent of the castrations we perform are open castrations in the field using general anesthesia, that’s the method I will discuss. Following sedation, the surgery itself takes about 15 minutes. The general anaesthetic maintains unconsciousness for up to 30-45 minutes. Once your gelding starts to come to, we assist with his recovery and help him get back on his feet.

The wound should ooze serum for a few days as it heals. A small amount of blood is normal within the first 12 hours. Some swelling of the scrotum and sheath is expected. Antibiotics and anti-inflammatories are typically prescribed following the surgery to help minimise post-operative infection and swelling.

Problems to watch for include:

Keep a close eye on your new gelding for signs of complications. The first 24 hours following the surgery are dedicated to quiet stall rest. This allows the clot formed from crushing the testicular blood vessels with the emasculator to mature, thus preventing excessive post-operative bleeding.

Following this period of rest, it’s time to begin a regime of mild daily exercise. Aafter a castration, exercise is critical because it promotes drainage of the scrotal wounds, reduces swelling and stimulates faster healing. However, don’t just turn the horse out and expect it to exercise on its own. You may need to provide some encouragement, starting with hand walking and steadily graduating to more vigorous forms of exercise.

Due to the presence of residual testosterone in the horse’s system, stallion-like behaviour will continue for about six weeks. Therefore, we advise you to keep the horse separate from your mares for at least six weeks after castration.

Any cookies that may not be particularly necessary for the website to function and is used specifically to collect user personal data via analytics, ads, other embedded contents are termed as non-necessary cookies. It is mandatory to procure user consent prior to running these cookies on your website.