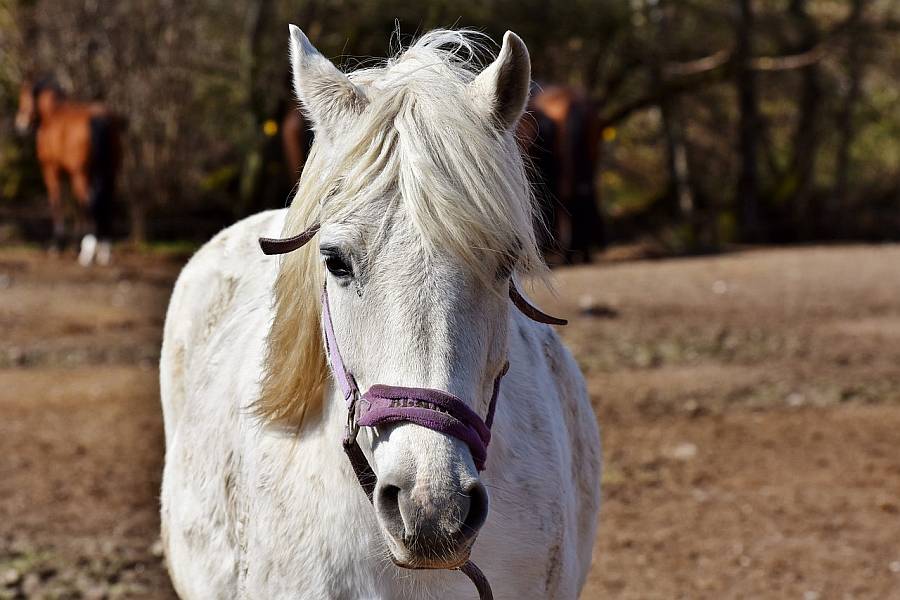 What is a gastric ulcer?

Under normal conditions, the forage in a horse’s stomach will ball up and absorb some of this acid, thereby acting as a buffer. Additionally, the saliva that a horse produces while chewing its forage lessens the acidity of the stomach juice. And at the level of the stomach lining, special cells work overtime to produce a thick mucus that coats and protects the stomach lining.

Despite all these tricks, acid invariably still makes its way right to the stomach lining and starts burning away. Luckily, the stomach has one last card to play — it can increase the production of stomach-lining cells, so that even if a few succumb to the acid exposure, there is always new cells ready to take their place, valiant soldiers sacrificing themselves for the greater good!

The clinical signs of stomach ulcers are wide and varied, but include:

The prevalence of gastric ulcers rises with increasing intensity of exercise and management, but this condition should be considered a potential problem in any horse that is demonstrating compatible clinical signs.

Multiple studies have shown risk factors that accompany stomach ulcers in horses. These include:

It’s important to note, however, that other studies have shown gastric ulcers can affect almost any horse, regardless of diet or routine — including those not in work and even those out at pasture.

The common denominators in a lot these risk factors seem to be stress and sugar.

Stress plays an important role in the development of stomach ulcers, because when the horse is stressed, the body produces a hormone called cortisol. Although cortisol has some beneficial effects, including reducing inflammation, it also happens to inhibit some of the body’s natural defense mechanisms against developing acid damage in the stomach.

Mainly, it does this in two ways:

Interestingly, the above two impacts of cortisol on the body areis is almost identical to how nonsteroidal anti-inflammatory drugs (NSAIDs)NSAIDS cause stomach ulcers — but we’ll leave that for another day.

Excessive sugar in the diet is rapidly fermented into lactic acid by bacteria in the stomach and small intestine (as well as the large intestine), and this only serves to make the acid in the stomach even stronger! Also, if a horse is getting too much concentrated feed, there’s a decent chance it’s not getting enough forage. Consequently, you lose that “ball-o’-forage” sponge, which was helping to soak up of the destructive acid. Sad!

Diagnosing gastric ulcers involves a variety of methods, including:

Historically, gastroscopy (scoping and directly looking at the inside of the stomach) has been the domain of referral hospitals, but the advent of smaller, portable endoscopes has increased the availability of this technique to regular veterinarians.

Scoping the stomach is really pretty simple. Following appropriate sedation, the endoscope’s thin, flexible tube is introduced through the nasal passages and passed into the throat, where the horse will swallow it. Once swallowed, the scope is pushed down the esophagus and passed into the stomach. Scoping permits the acid damage to be visualized directly so it can be graded. This allows us to determine how long the horse should be on treatment. After a treatment course, we can perform a follow-up endoscopy to ensure the stomach has fully healed.

Fecal occult blood testing is an appealing method of diagnosing ulcers because it’s easy to do and fairly low cost. This test lets us know if there is blood the manure, which can be an indication of gastric ulceration.

Treatment and prevention strategies include:

When it comes to reducing the acid in the stomach, the drug of choice is omeprazole. It’s the most powerful and longest acting suppressor of stomach acid production that we have. Long term, however, we don’t want to completely suppress acid production, as it serves an important role in digestion to break down protein.

Once an ulcer has healed, therefore, it may be more beneficial to coat/protect the stomach, rather than shut down acid production entirely. Mucosal protectants, such as sucralfate or pectin-lecithin (Pronutrin), can be used along with omeprazole to aid in healing the stomach, then continued after discontinuation of the omeprazole to ensure the stomach has an extra layer of defense to help prevent a new ulcer from forming.

Some beneficial changes to your feed program that may help prevent ulcers include offering more good-quality hay at regular intervals and reducing the amount of concentrate given at one time. Also, look for feeds that contain less rapidly digestible sugar and more fat and protein as a source of energy.

Sometimes ulcers get so bad that a horse must be removed from a heavy work or competition schedule, but this is pretty rare. Usually, it’s sufficient (along with appropriate treatments) to provide the ailing horse more turnout with other horses as a mental break and to reduce stress.

Stomach ulcers can be a serious condition that really bothers your horse, reduces performance and makes it harder to maintain hard-earned muscle. But with some straightforward management and dietary changes — and the help of some great diagnostics and treatments now being offered — this condition can be successfully diagnosed, treated and managed.