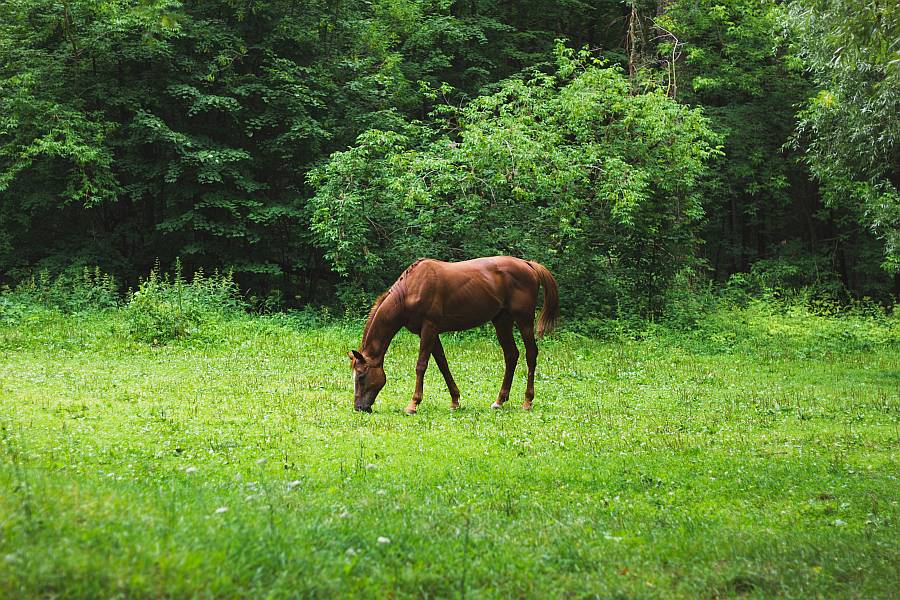 Does your horse show signs of breathing difficulties in the spring?

If so, it could be suffering from a medical issue similar to asthma in humans. Recurrent airway obstruction (RAO) is a chronic, non-infectious respiratory problem. You might know the condition by its previous medical name: Chronic Obstructive Pulmonary Disease, or COPD. In common parlance, it’s generally referred to as “heaves.”

Heaves typically afflicts horses age 7 or older. The cause is an allergic reaction to inhaled organic particles. These particles are prevalent in hay and straw. As a consequence, heaves can be a yearlong issue. But for some heaves sufferers, the symptoms appear only in spring, or are exacerbated at this time of year, after exposure to allergens produced by algal blooms, plants, grasses, bug bites, etc.

The small airways in the lung of a horse suffering from RAO grow narrow and become obstructed. As a horse owner, the first indication you get may be an occasional cough. As the disease progresses, further signs could include early fatigue when exercised (exercise intolerance), a raised respiratory rate, nasal discharge, wheezing and flaring of the nostrils. In addition, a horse suffering from heaves must work harder to draw in and expel air from its lungs. Over time, this struggle to breath leads to enlargement of the abdominal muscles and formation of a heave line.

If left untreated, a horse with heaves will experience reduced quality of life, and its ability to perform will be compromised.

Though no cure exists for heaves, there are steps you can take to manage the issue. Your goal should be to try to identify the allergens that trigger your horse’s symptoms and then work on helping your horse avoid them altogether.

You’ll need to put on your detective hat and begin monitoring your animal for symptoms. Pay attention to when symptoms appear and their severity. Is it after spending time in the stall or following a run in the pasture? A common culprit is the round bale – horses tend to bury their head into them as they eat, facilitating the inhalation of many RAO-exacerbating particles. These sort of gumshoe sleuthing clues can aid your veterinarian in determining what types of allergens are causing the problem.

If the symptoms are worse indoors, you should minimize your horse’s exposure to dust. Hay should be soaked prior to feeding to minimize dust in the air. Alternatively, you can switch entirely to a pelleted feed. Additionally, low-dust bedding is available to try. Barn ventilation can be improved with the use of large fans and ensuring that all available windows remain open. Many farms elect to stall an affected horse closest to the best ventilated portion of the barn, often by the main doors of the structure.

If your horse’s symptoms appear worse when spending more time outdoors, you’ll need to manage exposure to seasonal allergens during periods spent outside the barn. Spring and fall are generally the worst seasons for what’s known as pasture-associated heaves.

Skin and blood tests are also available that look for heightened reactions to specific allergens.

A horse that is experiencing respiratory difficulties due to heaves requires medical treatment. The typical treatment plan is the administration of corticosteroids to reduce inflammation in the lungs and bronchodilators to open up the small airways and restore airflow.

These medications will work best when they are accompanied by an ongoing effort to minimize allergen exposure. With appropriate management, your horse may achieve a complete or near-complete recovery from this medical condition.