So You Want to Breed Your Mare 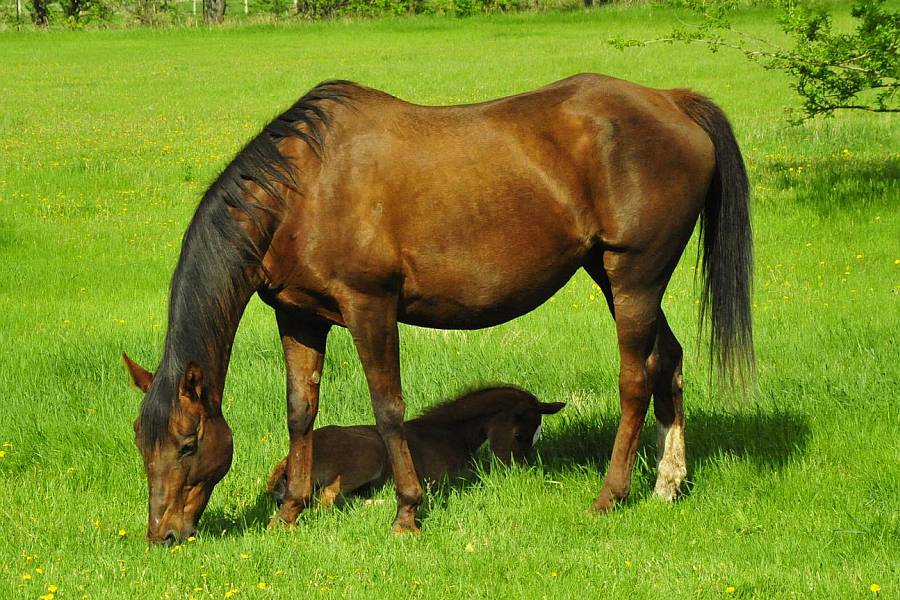 [In future editions of our newsletter, we’ll deal with the foaling process and management of a mare and foal. The purpose of this article is to help you understand the time and cost involved in simply getting a mare pregnant.]

Alright, you’ve weighed the pros and cons and your decision is final: you want your mare to have a foal.

The mare’s cycle and breeding season

In our hemisphere, the natural breeding season of mares is between May and September. However, the horse breeding season can be artificially lengthened through the use of lights and certain drugs.

In fact, the goal of most Thoroughbred breeding operations is to have a mare give birth as close to January 1 as possible, then have her rebred and pregnant again within a couple of weeks. For the backyard breeding situation, you may want to consider breeding your mare later, rather than earlier, in the natural breeding season. 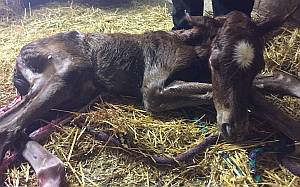 In fact, the goal of most Thoroughbred breeding operations is to have a mare give birth as close to January 1 as possible, then have her rebred and pregnant again within a couple of weeks. For the backyard breeding situation, you may want to consider breeding your mare later, rather than earlier, in the natural breeding season.

This way the foal will be born in warmer weather making management of the mare and foal easier. Wait too long, however, and your foal will still be quite small when the colder weather arrives.

During breeding season, the mare will come into heat every 21 days. Any given heat lasts approximately 7 days, with the mare tending to ovulate somewhere in the last 2 days of this week of heat.

Determining when your mare is in heat

In order for a mare to get pregnant, we need to ensure that a stallion’s semen reaches the oviduct in the mare’s uterus around the time of ovulation.

Sounds simple, right? In some cases, it really is. However, a lot of mares are not very good about telling us when they enter a new phase of heat, particularly if they have a foal at foot. If we don’t know when she’s in heat, we won’t be able to time her ovulation accurately. It follows, logically, that without knowing when she’s ovulating, we will have a hard time ensuring semen is in the oviduct when the egg is ready to be fertilized!

So the first order of business is ensuring we know when your mare is in heat.

Some farms will use a “teaser” to determine if a mare is in heat. A teaser might be a gelding or an older, less fertile stallion. This guy’s job is not all that great. He’s made to walk by the mare, so we can observe whether she exhibits heat behaviors (raising her tail, urinating, “winking” her vulva repeatedly, etc.). Unfortunately for him, that’s all he gets to do. Afterwards, he’s promptly put back where he came from.

If a teaser is unavailable, identifying when a mare is in heat is more difficult. In this case, rectal palpation and an ultrasound exam of the reproductive tract are essential to determining the state of the mare’s ovaries and uterus. If the mare is not in heat, there are drugs we can administer to shorten the time between heat cycles and bring her into heat in a predictable time frame. It should be noted that several visits by the veterinarian may be needed to ensure your mare is in a good heat.

Okay! Either by teasing the mare or by ultrasound examination and intervention, we now know our mare is in heat. What’s next?

Your next question might be: How do you know, specifically, when a mare will ovulate? In order to predict ovulation, we need to ultrasound the ovaries. During breeding season, the ovaries are continually growing large fluid-filled “follicles” that contain individual eggs. Over the course of a heat period (estrus), one particular follicle becomes the dominant follicle and grows much larger than all the other follicles in the ovary. At a certain size, it will ripen, soften and the egg will burst out to be caught by the oviduct of the uterus. This process is called ovulation. From here, the egg will make its way down to meet with any semen that is present.

Using ultrasound, we can measure the growth rate of the follicle and look for signs that it’s ready to ovulate. Most ovulatory follicles grow 2 mm to 3 mm in diameter per day and tend to ovulate after reaching 30 mm to 45 mm in diameter. The size at which a follicle will ovulate varies from mare to mare and is dependent on factors such as the breed, size of the mare and time of year.

To rid ourselves of this variability, we can use medications that induce ovulation of the dominant follicle once it reaches a certain size. Around 30 mm or larger, follicles begin producing a lot of estrogen. This hormone causes the uterus to look a certain way on ultrasound and feel a certain way on rectal palpation. Once a follicle reaches 30 mm or larger and is producing enough estrogen to show these characteristic “estrus” changes in the uterus, we can generally use the medications to induce ovulation within a predictable window of time, typically 48 hours.

Then, depending on the type of semen we are using, we inseminate the mare either naturally or artificially, with the goal of having the semen arrive alive and well at the meetup spot where the egg will join following ovulation.

As mentioned previously, we need to get semen into the mare’s uterus around the time of ovulation.

Certain factors may make the timing of insemination more or less crucial to achieving successful fertilization. These include the quality of the semen and the method by which it is collected and transported. 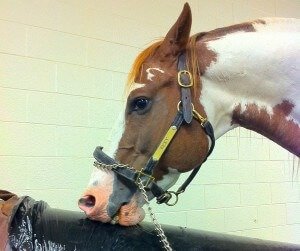 Frozen semen: When frozen semen is used, the timing of the insemination has to match almost exactly with ovulation to achieve fertilization of the egg. This is because the sperm in frozen semen are not as viable as fresh semen within the mare’s uterus.

Let’s say we’re breeding your mare with fresh, chilled semen. As a rule, this type of semen can survive in a mare’s uterus for at least 48 hours. So if the semen is placed in the uterus within 48 hours prior to ovulation, the chances of successful fertilization of the ovulated egg are quite high.

If we inseminate the mare too soon, say 4 days before she ovulates, likely most of the semen will die before the egg reaches them in the oviduct, wasting your time and money. On the other hand, frozen semen will live in the mare’s uterus for only 4 to 6 hours. Thus, the timing of insemination is more critical. This translates to a higher cost to you, the owner, because many more ultrasounds are needed to achieve the required level of timing accuracy.

In summary, we need to get live semen to the oviduct in the uterus around the same time as the egg ovulates. How close our timing has to be depends on the method of semen collection and storage.

The cost of breeding can add up

Assuming you’re not just throwing your mare into a field with a stallion and letting nature take its course, you’ll probably require a veterinarian to assist in your breeding operation. There are numerous advantages to this strategy. Firstly, knowing specifically when ovulation occurred gives you an accurate foaling date, taking a lot of the guesswork out of your foal watch season.

Additionally, knowing when the mare has ovulated allows your veterinarian to determine when to check for twins. Mare’s don’t handle twins well, so we typically eliminate one of the embryos. By doing so, we remove the medical risk to the mare and ensure at least one embryo has the chance to grow into a healthy foal. Beyond 17 days of pregnancy, however, if the twins are side by side, it becomes almost impossible to reduce one pregnancy without damaging the other.

Determining when a mare is in heat without a teaser (2 to 4 visits); repeatedly ultrasounding the mare to measure the follicles (typically 2 to 3 visits); confirming ovulation (if she doesn’t ovulate within 48 hours of insemination, we need to re-inseminate because all the semen in the first load are likely dead!); and then a couple visits dedicated to confirmation of pregnancy (typically 14 days following ovulation).

That’s a lot of visits from the vet!

Your veterinary breeding costs can easily run upwards to $1,200 or $1,500. And that’s if your mare “catches” in one attempt. We haven’t even discussed the possibility of having to flush her uterus in cases of infections that have made the uterus inhospitable to semen and the fertilized embryo!

However, with use of a teaser and a bit of effort and luck on your part, it’s very possible that, on our first visit, we’ll find your mare in perfect heat with a follicle just about ready to ovulate. In this situation, your veterinary costs could be as low as $500 or $600.

Breeding your mare can be incredibly rewarding, but it’s important to be informed about the breeding process and to budget your time and money appropriately for this occasionally frustrating and potentially costly endeavor! 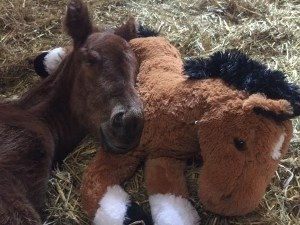