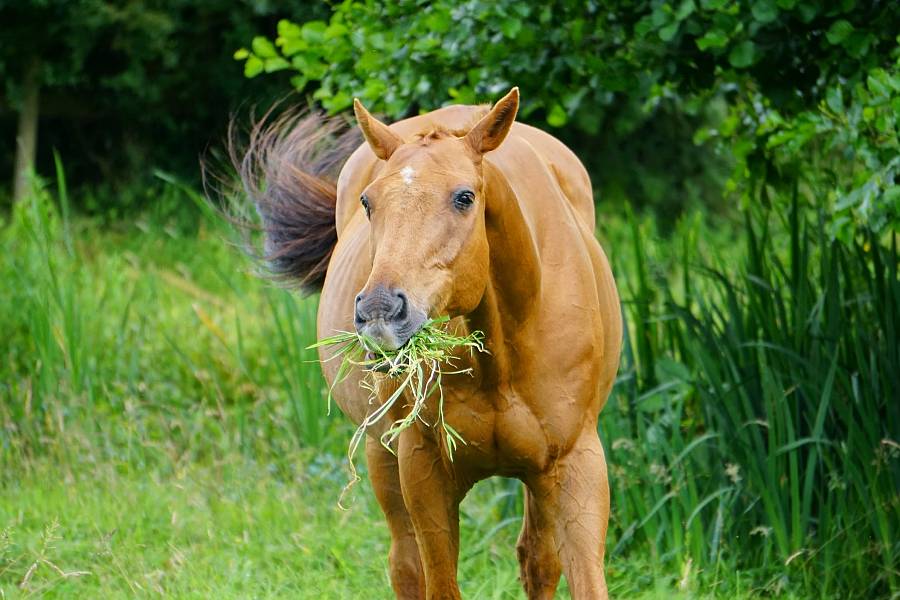 Winter is over, and it’s time once again to switch your horse from a diet of dried hay to the fresh grasses growing in your pasture. All horses are eager to begin munching on those tasty spring sprouts, but caution must exercised to ensure a safe, healthy transition.

Ideally, spring grazing should be delayed until the grasses reach a height of 6-to-8 inches, and then it should be introduced gradually. On day one, allow grazing for just 15 minutes. On day two, increase the grazing time to 30 minutes.

On each subsequent day, add another 15 minutes — until you reach 4 to 5 hours of grazing time. At that point, you can permit your horse to enjoy unrestricted grazing.

Pro tip: The scent of fresh spring grass will have your horse pawing at the gate to get to the pasture. For the first several grazing events of the year, feed your horse a normal hay diet before turning it out. This will help avoid overeating, which can occur even when feeding times are restricted.

Changing feedstuffs too rapidly can have health consequences

Risk of digestive dysfunction and colic

The result is that toxins may be absorbed by the horse, leading to risk of digestive dysfunction and colic. By introducing spring grass gradually, after a winter diet of dried hay, you give the microbes more time to adjust. This makes for a smoother transition — and a healthier, happier horse.

Spring grass is high in what’s known as non-structural carbohydrate (NSC), which is the sum of the plant’s simple sugars, fructan and starch component. For this reason, spring grass is especially appealing to horses, but it’s also associated with an increased risk of laminitis.

Researchers in the U.S. have found that while the annual incidence of laminitis in horses is 2%, the incidence rate rises to about 5% in the spring and summer. Moreover, it was found that nearly half of all reported cases of laminitis occur in animals at pasture.

Further, there is evidence of association, and even stronger evidence of causation, between laminitis and rapid intake (and total intake) of NSC, and the administration of high concentrations of fructan to horses has resulted in laminitis.

Horses are selective grazers, and they like the taste of grass with high sugar content. Consequently, if left unsupervised, they’ll put themselves at risk of laminitis by overeating spring grass

As a horse owner, you can protect the health of your animal by restricting, even avoiding, grazing in the early spring.